My review: One of the BEST RPG ever produced!

Do you know: Final Fantasy VII is one of the best-selling console game in Japan. It has been selected as one of the top-tens in the Japanese "Ninki Chart 97" (entertainment focuses chart). Note that it's the only console game within the top-ten positions (the first place is an Anime movie, The Princess Mononoke).

Cloud and Tifa are going to show you what's included in the FF7 Desktop Theme! Take a look before download!

Barett and Red are going to tell you how the FF7 Desktop Theme was created!

Cloud and Sephiroth are going to give you some classic FF7 Full Motion Videos in MPEG format!

Yuffie and Vincent are going to show you other gateways to the world of Final Fantasy in their links section! 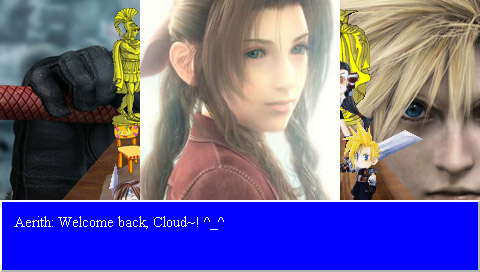 Own a PlayStation Portable? Bring this interesting and useful little JavaScript game to your PSP! "Mai's Dreamland for PSP" is a mini RPG itself, but it also includes the functions of an OFFLINE portal with some useful applications (eg. address book, calculator, memo pad) and interesting mini games (eg. PSP Solitaire, MineSweeper, Sudoku / Number Place, Tetris). Apart from Mai, you may also use other characters such as Cloud (from "Final Fantasy VII: Advent Children"), Kira (from "Gundam SEED Destiny") and Sousuke (from "Full Metal Panic"). Expand your PSP's horizons!

Here is the FF7 Desktop Theme I made (more than 10 years ago... the FIRST desktop theme I made :P) which contains:

If you have installed the Desktop Theme and have Internet Explorer (Windows XP and older only), click here and animate your desktop! 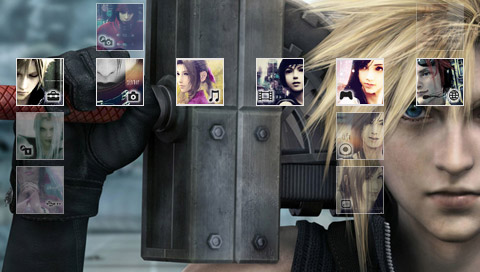 Own a PlayStation Portable? The latest firmware update (3.70+) allows you to fully customize the look of your PSP, just like desktop theme for PC! Here we have a Final Fantasy VII theme for your PSP!

Using Windows Vista? Do you want a COOL desktop analog clock with the background as Cloud, other Final Fantasy or Anime characters, or even your own picture? Check out our Windows Sidebar Gadget Gallery!

Note on Aerith/Aeris's name: I have been told that Aerith is not a correct name. Actually BOTH names are correct. "Aerith" is used in the Japanese version of FF7, while "Aeris" is used in the English version of FF7. However, official Japanese materials were using the spelling "Aerith", and developers have stated that the name in roman alphabet was (almost) an anagram of the English word "Earth", thus confirming that the intended spelling was indeed "Aerith".

Do you have a blog or webpage and want to link this page? Click here!