My review: This is certainly a GREAT game! The graphics is stunning(it could even be better if this game was on a better machine...) and the FMVs are just AWESOME! The characters are realistic and they all have their own personalities. The most outstanding part of the game is perhaps the "love and romance" in the story. These elements used to be the weak parts in most of the previous FF titles and other RPGs but FF8 handles them quite well. The battle system has changed dramatically. It's up to one's taste to think whether the changes are good or not, but the new system will certainly give you a refreshing feeling.

Interesting Note: "Eyes On Me", the English theme song of FF8 sung by Faye Wong won the award "Song of The Year (Foreign Music)" in the 14th "Japanese Gold Disc Award", which is an important music event in Japan. Note that this is the FIRST time a game song wins this award.

which fits the Theme. Please read this text file for installation instructions.

If you have installed the Desktop Theme and have Internet Explorer (Windows XP and older only), click here and animate your desktop! 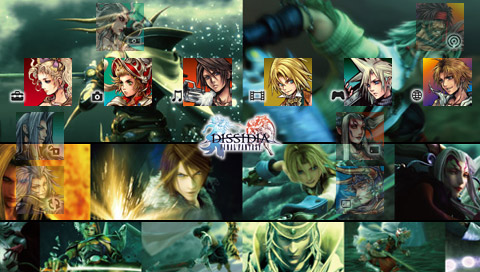 Own a PlayStation Portable? The latest firmware update (3.70+) allows you to fully customize the look of your PSP, just like desktop theme for PC! Here we have a "Dissidia: Final Fantasy" theme for your PSP!

Come get some desktop accessories related to FF8, including FF8 solitare, startup/shutdown logos, cursors and MORE!!

Take a look at some of BEST video sequences in the game! They were extracted directly from the game CDs and re-encoded into MPEG movie files with music clips mixed from the soundtrack. All these ensure that they are the BEST on the Web!

Using Windows Vista? Do you want a COOL desktop analog clock with the background as Squall, other Final Fantasy or Anime characters, or even your own picture? Check out our Windows Sidebar Gadget Gallery!

If you think your site rocks and is related to Final Fantasy VIII then please fill in this form and I will put a link here.