My review: It has been 5 years since the last major FF title (FF10). Final Fantasy XII finally arrives with amazing graphics, tons of new elements and surprises.

If you have been following the news about FF12, you should know that there are some major staff changes for this game. As a result, this game is in many ways different from the past FF titles. This story focuses more on wars and human conflicts, unlike the past FF titles which have more super-natural elements. The past summon beasts are gone (their names now belong to the battle ships) and replaced with new ones based on Constellations. In general, this game has many elements similar to Final Fantasy Tactics (SLG) and Final Fantasy XI (MMORPG).

Final Fantasy XII is now a complete 3D world where you can freely change your view point just like most other 3D games. The battle system has changed dramatically and is now fully integrated into this "free" 3D world. Forget about separated battle stages which are used in all previous FF titles. Now you can see monsters running around the normal field and battles take place in real time in which all your characters as well as monsters can move and act freely inside the battle. In my opinions, this is a VERY GOOD change for Final Fantasy. Battles are more realistic, more fun and require more tactics. I believe this will be the way to go for future FF titles.

I like most of the characters in this game, especially Ashe, Balthier and Fran with their excellent character designs and outstanding roles in the story. However, not every main character is as good as expected. Vaan is a disappointing one. His character design is ordinary, and his role in the adventure party and the story in general is weak. Balthier looks much more like the lead character than Vaan, who was supposed to be the one before the release of the game :P

In short, Final Fantasy XII is a real good RPG game in which no FF fans and even those who have never played FF before should miss. Yes there are many changes in this game, but still, it is Final Fantasy.

Ashe, Vaan and their companions are the Guides on this page!

I want a NEW character! Can you leave, please?

Ashe, Vaan and all other major characters are shown here~!

Final Fantasy series is well known to use some of the best CG movies in the game industry, and Final Fantasy XII is no exception. Come download some trailers and in-game videos of this game! 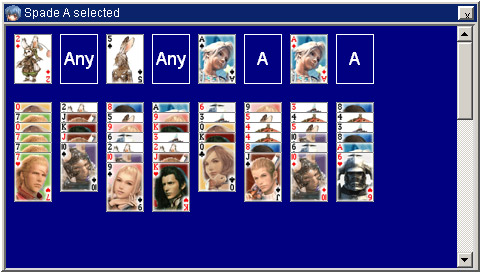 Own a PlayStation Portable? Download this to your PSP and play Solitaire with a Final Fantasy XII theme! This game is part of my "Mai's Dreamland for PSP" project, which is a mini RPG itself, but it also includes the functions of an OFFLINE portal with some useful applications (eg. address book, calculator, memo pad) and interesting mini games (eg. PSP Solitaire, MineSweeper, Sudoku / Number Place, Tetris). Apart from Mai, you may also use other characters such as Cloud (from "Final Fantasy VII: Advent Children"), Kira (from "Gundam SEED Destiny") and Sousuke (from "Full Metal Panic"). Expand your PSP's horizons!

If you think your site rocks and is related to Final Fantasy XII then please fill in this form and I will put a link here.